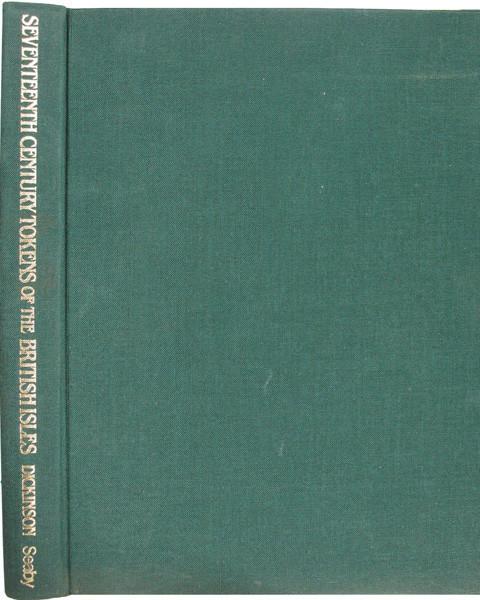 Seventeenth Century Tokens of The British Isles and their Values. No d/j.

Michael Dickinson. Published by B A Seaby, London, 1986.  HB (green cloth with gilt-lettered spine).  x + 292 pages including 4 b&w plates of photographs and 3 plates of line drawings of tradesmen's arms.  Based on Williamson, with revisions, additions and valuations.   ISBN 0900652780.  No dj, but a nice clean very good copy.

For those who cannot find (or afford) an original Williamson, this is essential - and also very useful even if you have an original if you want to put a price on these things. It also has many revisions, so is a great use to metal detectorists and students of local history. Of course, the prices are a bit out of date, but apart from 'The Token Book' this is as good as you will get.

The blurb says that this catalogue is the first publication in almost a century to list all known major types of the seventeenth century series of token coinage issued in the British Isles between 1648 and 1679.
The tokens were mostly struck in copper or bronze in denominations of farthings and halfpennies with occasional pennies. Commonly they were round, but octagonal, square and heart-shaped flans were also used.
They offer a fascinating insight into life and trade, personal circumstances and local history in the third quarter of the seventeenth century.
The catalogue lists about fourteen thousand different tokens, based on the numbering system used in G C Williamson's classic work Trade Tokens Issued in the Seventeenth
Century (two volumes. 1889, 1891).
Many tokens have come to light since that date and new entries have been inserted in the appropriate places using an 'A' number. In places, over twenty per cent of the tokens listed are 'new'.
The tokens are described in an abbreviated form that is sufficiently detailed to enable identification. Full indexes list token-issuing localities and also issuers whose tokens show no locality. Market values are given for specimens in fine condition with a minimum price suggested for extremely rare pieces.
Four plates of b&w illustrations show major types and shapes of tokens and the additional three plates of line drawings of City Companies' arms are an invaluable guide to the heraldry that is featured on numerous pieces.
An indispensable catalogue for all collectors of the seventeenth century token series, this book will also be of great interest and use to local history students and economists interested in the period.