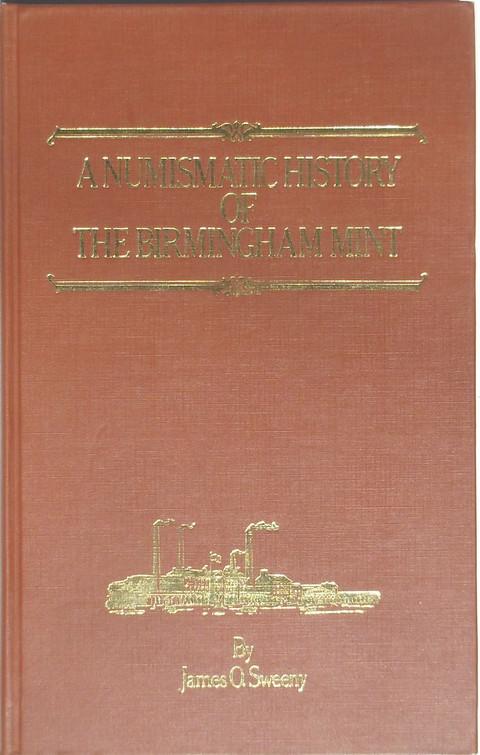 A Numismatic History of The Birmingham Mint. No d/j

James O Sweeny.  Published by the Mint, Birmingham. 1981. HB (brown cloth with gilt-lettered spine and front cover.)  245 pages, illustrated throughout in the text with good b&w photographs.  The history of the Birmingham Mint plus a catalogue of pieces they have struck. 150 x 240mm.  Part of the gilt lettering of the spine is missing, as is the dj, tips of the lower front corners very slightly rubbed, otherwise the contents are very good.

The blurb reads:  The Birmingham Mint is a unique enterprise, being the oldest non-government mint still in operation today. Since 185O when, as Ralph Heaton & Sons, it first entered the minting field by buying at auction much of the equipment of Matthew Boulton's defunct Soho Mint, it has manufactured currency for well over 100 governments and issuing authorities in all parts of the world.
This book traces the company's history from the early business activities of the founding Heaton family in the late 18th century through to the present day. The fundamental influence of The Birmingham Mint on the development of world coinage is demonstrated fully, and some fascinating new light is thrown on its relations with the British Royal Mint during the 19th and 20th centuries. There are also chapters on The Birmingham Mint's development of minting equipment and its role in building many of the early national mints, from China to Colombia. The various mintmarks used by the Heatons on their coins, including the well-known 'H' , are described in detail. The book is fully illustrated with contemporary photographs and prints.
The Catalogue section is of special interest to coin collectors. ln it, for the first time, are listed all the known coinages produced by the Birmingham Mint up to 1970, together with many rare patterns, specimens and special strikes. Mintage quantities are shown, and all the main designs are illustrated with photographs of the coins from the Mint's own collection wherever possible.
The appendices select some special aspects of the Mint's history for more detailed treatment, such as the contract to operate the Marseilles Mint in France in the 1850s, the Soho Mint auction, and the early involvement with Australasian tokens.