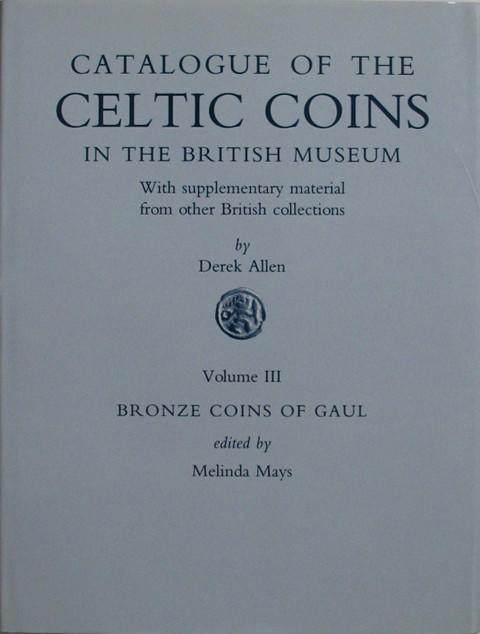 Catalogue of the Celtic Coins in the British Museum Vol. III. Bronze Coins of Gaul, with supplementary material from other British Collections.

The coins of the celts in Britain should not be looked at in isolation, for there was much interaction between Britain and the continent.
The BM collection comes from many sources, but mainly from the collections of a French archaeologist, Léon Morel of Reims, which was acquired in 1901, and that of Sir John Evans, presented to the Museum in 1919 by his son, Sir Arthur Evans.
The plates are excellent.  Over a thousand coins are listed and most of them illustrated.  The introduction discusses coin production, function, metrology, denominations, chronology and attribution. This is the most detailed work on the potin coins to be published.

The book blurb reads:  This third volume of the Catalogue of the Celtic Coins in the British Museum is concerned with the struck and cast ('potin') bronze coinage of Gaul' The earliest coins are likely to have been issued in the late second or early first century BC, and the latest circulation continued into the first century AD. The introduction discusses coin production, function, metrology and denominations, chronology and contexts, distribution and attribution, and provides a detailed commentary
on the catalogue. Over 1,000 coins from the British Museum and other British collections are listed, and most are illustrated. No comprehensive survey of all known potin types has hitherto been published, and this extensive catalogue will, therefore, provide an
essential point of reference for the publication of future finds.
Researched and written by Derek Allen, formerly an Assistant Keeper in the Department of Coins and Medals at the British Museum and later Secretary of the British Academy. the catalogue has been revised, completed and brought fully up to date by Melinda
May, in the light of studies published since Allen's death in 1975.
Dr Melinda Mays, formerly a Research Assistant at the Yorkshire Museum, is a freelance researcher in numismatics, specialising in Celtic and Roman coins.