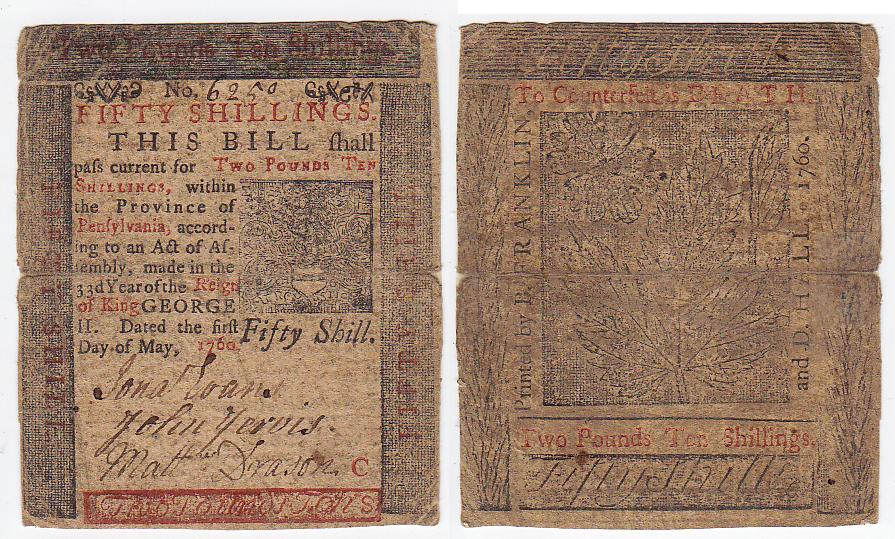 Banknote. George II. 1st May, 1760. No. 6250. Printed black and red both sides. Plate C. Hand signed by Jona Evans, John Jervis and Mattw Drason. 70 x 84mm. Trimmed fairly tightly to the margins. Printed by Benjamin Franklin and David Hall.
Sold by Colin Narbeth & Son Ltd graded as “ f restored” priced at £650.
Benjamin Franklin 1706 -1790) was an American polymath active as a writer, scientist, inventor, statesman, diplomat, printer, publisher and political philosopher. Among the leading intellectuals and political activists of his time, he was one of the Founding Fathers of the USA, and the first United States Postmaster General. As a scientist, he was a major figure in the American Enlightenment and the history of physics for his discoveries and theories regarding electricity. As an inventor, he is known for the lightning rod, bifocal spectacles, and the Franklin stove. He founded the University of Pennsylvania.
Wikipedia says that Franklin was foundational in defining the American ethos as a marriage of the practical values of thrift, hard work, education, community spirit, self-governing institutions, and opposition to authoritarianism both political and religious, with the scientific and tolerant values of the Enlightenment. In the words of historian Henry Steele Commager, "In Franklin could be merged the virtues of Puritanism without its defects, the illumination of the Enlightenment without its heat." To Walter Isaacson, this makes Franklin "the most accomplished American of his age and the most influential in inventing the type of society America would become."
From 1785 to 1788, he served as governor of Pennsylvania. Although he initially owned and dealt in slaves, by the late 1750s, he began arguing against slavery, became an abolitionist, and promoted education and the integration of blacks into US society.