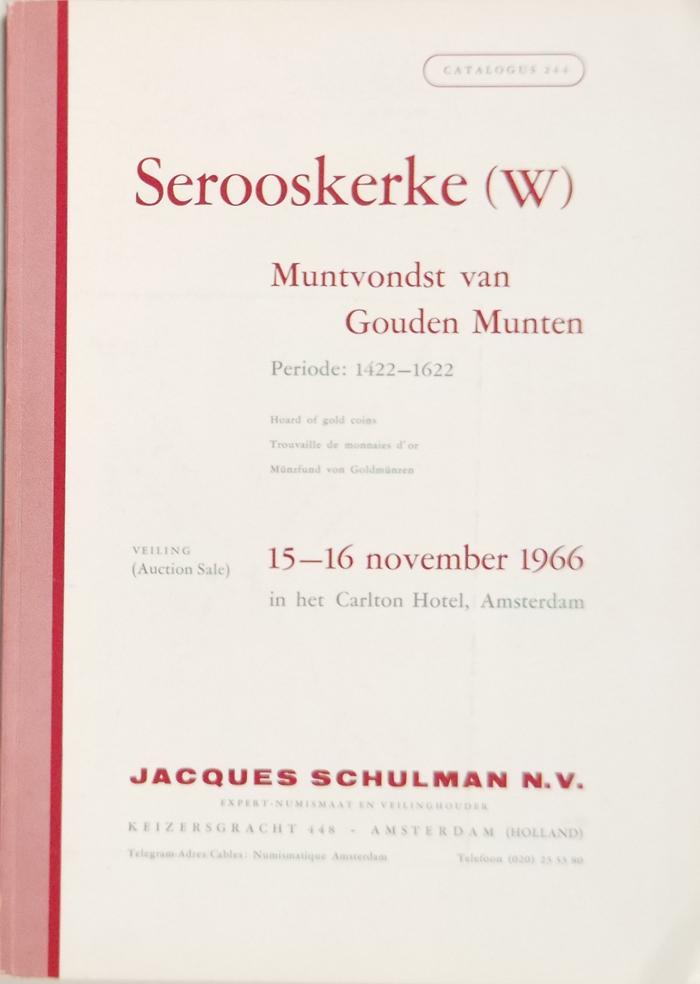 The Serooskerke find of coins, of which the greater part is now offered for sale to institutional and private collectors, is certainly one of the most important and valuable hoards which has ever come under the hammer in our country. As regards the number of gold coins, it has only been surpassed in the XIXth Century by the Barneveld find with its 2023 gold coins, and by the Amersfoort find with its 3662 gold pieces and a small number of silver coins. The first of these two finds was sold privately in 1871, at which time a number of pieces carne into the possession of the Royal Coin Cabinet, and the second was sold by auction in two parts in 1894, the first half by the firm of G. Th. Bom, and the other by the grandfather of the present auctioneer. Understandably the question has been raised here and there as to whether it would not be desirabie for such a find to be kept together in its entirety, on account of its comprehensiveness and its variety, since it forms a particularly interesting document illuminating XVIIth Century monetary history. Now according to Dutch law as at present in force, the owners, that is the finder and the ground-landlord jointly, are entitled to dispose of the hoard entirely according to their good pleasure, so long as they fulfil their duty in notifying the find to the appropriate archaeological institute. This naturally does not preclude the possibility of a Museum or similar body acquiring the whole hoard after suitable negotiation. Such a course of action seems hardly sensible in the case of a Find of such magnitude, requiring an excessively large amount for its purchase, and presenting a number of very difficult technical problems if it were to be displayed in its entirety. Furthermore the retaining of all hoards as they come to light into public ownership would dry up the only source from which private collections can be supplied, and would thus lead to a decline in the interest now shown in the material gathered together in museums. Against these drawbacks the chances that in the future, by the use of new methods of research regarding these relatively well-known coins of the XVlth and XVIIth Century, further information rnay come to light, must be considered to be slight. For those reasons, and in order to satisfy the requirements of scholarship, it is felt that these can best be assisted by producing as comprehensive a documentation of the whole find as possible, and to that end en extensive article will appear in the "Jaarboek voor Munt- en Penningkunde". In addition, the Gemeente Serooskerke has kept a representative selection from the find, which is on view now at Veere, and, thanks to the cooperation of the owners, the Royal Coin Cabinet has acquired a series of the most important types lacking in its collection, which will be increased it is hoped by the acquisition of a few further pieces at the Auction Sale. Part of the coins already acquired has been included in the current exhibition: "What did they do with their money?" DR. H. ENNO VAN GELDER,  Keeper of the Royal Coin Cabinet

Depictions of books are images of the actual item offered for sale.