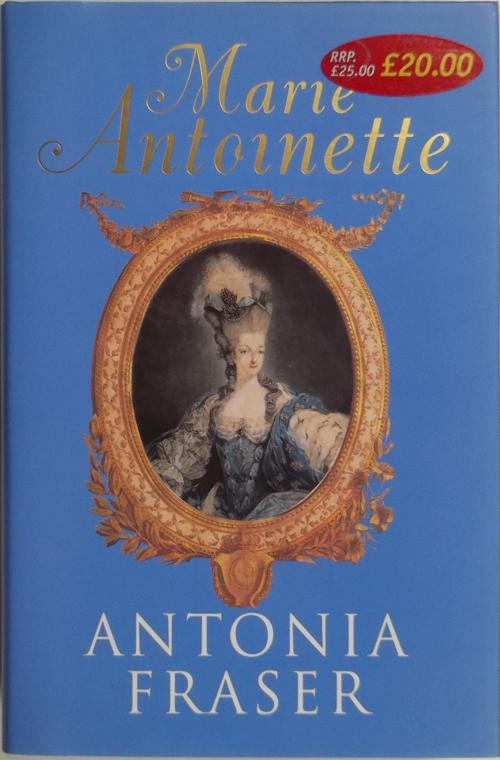 Antonia Fraser.  Published by Weidenfeld & Nicholson, 2001.  HB (Blue cloth with gilt-titled spine) xviii + 488 pages + 48 b&w and colour plates. 150 x 233mm  ISBN 0297819089.  Sticker on dj, otherwise almost as new.
Famously known as the eighteenth-century French queen whose excesses have become a legend, Marie Antoinette was blamed for instigating the French Revolution. The story of her journey begins as a fourteen-year-old sent from Vienna to marry the future Louis XVI to her courageous defence before she was sent to the guillotine reveals a woman of greater complexity and character than we have previously understood.
The youngest daughter, fifteenth out of sixteen children, of Austrian empress Maria Teresa and Francis I, Marie Antoinette was sent on a journey by her mother from Vienna to Versailles with the expectation that she would further Austrian interests at all times. Yet, Marie Antoinette was by nature far from interested in state affairs and much more inclined to exert a gracious, philanthropic role, patronizing the arts especially music, as royalty would come to behave in the nineteenth century. Despite this the French accused her of political interference and wrote scandalous tracts against her, mocking her lack of sophistication. Meanwhile, longing for a family and the birth of an heir who would have cemented the Franco-Austro alliance, she had to endure more than eight years of public humiliation for her barren marriage before the delivery of the first of her four children.

As these problems unfold, Fraser weaves a richly detailed account of Marie Antoinette's other, more poignant journey: from the ill-educated and unprepared girl who sought refuge in pleasure as a consolation into a courageous woman who defied her enemies at her trial with consummate intelligence, arousing the admiration of even the most hostile revolutionaries.

Marie Antoinette is a work of some scholarship. Drawing on a wealth of family letters and other archival materials.  The author successfully avoiding the hagiography of the queen's admirers and the misogyny of many of her critics. The result is an utterly riveting and intensely moving book.

Still a controversial figure, as well as a celebrated one, Marie Antoinette's dramatic life-story continues to arouse mixed emotions. To many people, she is still 'la Reine méchante', whose extravagance and frivolity helped to bring down the French monarchy; her indifference to popular suffering epitomised by the (apocryphal) words: 'let them eat cake'. She was accused of personal profligacies and sexual excesses. Others are equally passionate in her defence: to them, she is a victim of misogyny.
Marie Antoinette remains one of the genuinely romantic and ill-treated characters in history. A compassionate queen and devoted mother, she did little to deserve her tragic destiny. She was born in 1755, one of 16 children of the Austrian Empress Maria Theresa. At the age of 15, she was to be the bride of the French Dauphin, heir to his grandfather Louis XV. The Dauphin came to the throne as Louis XVI in 1774 and for more than ten years the French court at Versailles glittered under the presidency of its young, beautiful and artistic queen, in what would be seen afterwards as the last throw of the Ancien Regime.

In this biography, Antonia Fraser examines Marie Antoinette's influence over the Louis, the accusations and sexual slurs made against her, her patronage of the arts which enhanced French cultural life, her imprisonment, the death threats made against her, rumours of lesbian affairs, and her trial (during which her 7-year-old son was forced to testify to sexual abuse by his mother) and her eventual execution by guillotine in 1793.
The major film directed by Sofia Coppola is based on this book.