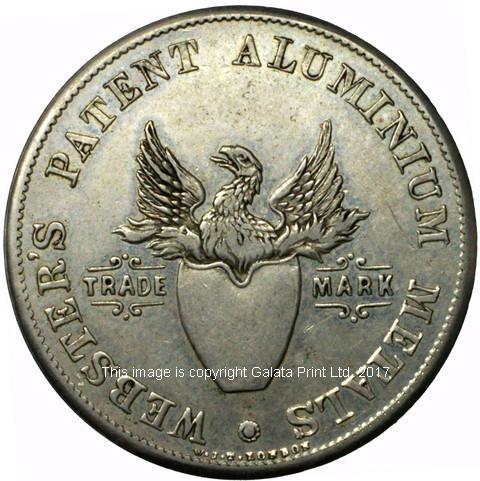 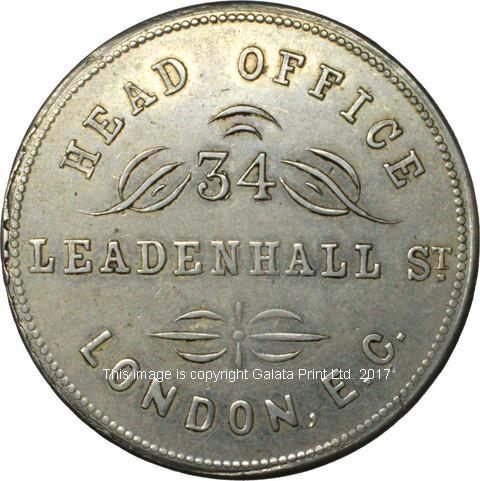 Nickel-silver (?).  Diameter 30mm.  WEBSTER'S PATENT ALUMINIUM METALS around; in centre, a phoenix arising from a crucible, at sides TRADE MARK  R.  HEAD OFFICE 34 LEADENHALL ST LONDON in four lines along with various ornaments.  About EF, with some original lustre,  Rare.*
The token must have been issued between 1882 and 1887.  *The image here is an unretouched photo of the actual item offered for sale.

James Webster was born in Basford, Nottinghamshire, in 1820.  He took out his first patent in 1847, but his success as an inventor did not mean success in business and he was made bankrupt in May 1850.  He moved to Leicester where he became a gas engineer. In 1856 he moved to Edgbaston, Birmingham, where he took out a series of patents relating to gas pressure gauges, safety valves, pumps, gas appliances, metal refining and extraction. He exhibited at the Birmingham Industrial Exhibition in 1865.

For a decade, or so Webster experimented on the production of the new wonder metal, aluminium. Up until this time aluminium had been produced only in very small quantities and was far too expensive to be used commercially. In June 1881 he unveiled his breakthrough, using sodium reduction, which enabled aluminium to be produced commercially. Webster's Patent Aluminium Crown Metal Company with capital of £120,000 was floated. The Hollywood Works, in Solihull, was built at a cost of £50,000, and by 1883 was manufacturing aluminium ingots, plates, and wire.

However, despite improvments to Webster's process, a new electrolytic process, which further reduced the cost of manufacture, quickly took over and in 1900 the company was voluntarily wound up.