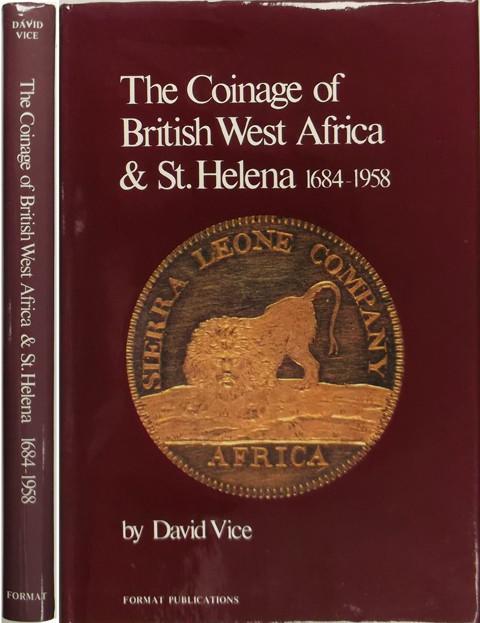 David Vice. With photography by Paul Withers. Published by Format, Birmingham. 1983. HB (burgundy cloth with gilt-lettered title and spine).  x + 237 pages. Well-illustrated throughout the text with b&w photographs. Priced. 162 x 240mm. ISBN 0950881201 Covers both coins and tokens. Not only a catalogue, but a history of money in the areas covered, including the cowry and gin.  Top edge spotted, otherwise a nearly Fine copy.

The best work on the subject.

From the dust jacket blurb: This is a book which should appeal to the serious student of the series and the casual collector alike. For ease of use it has been written in two parts.
Part One relates the history. Taking West Africa as an example, it traces the development of its coinage and the rich and colourful history of the continent.
The primitive monies described exude romance and mystique.  The coinage of the African Company of Merchants evokes memories of Britain's participation in the slave trade. The alternative philosophy of the abolitionist movement is epitomised by the issues of the rival Sierra Leone Company.  Tokens struck for merchants and explorers commemorate the opening up of Africa's interior. By risking their lives in an area known as 'the white man's grave' these brave men and women sowed the seeds of future British colonialism. Finally, the years of formal Empire are represented by the twentieth century issues of the West African Currency Board.
Part Two, the catalogue section, should be of particular interest to collectors and dealers. It forms a comprehensive guide to the coins, tokens and tickets issued for British West Africa and St Helena whilst under some form of British authority.
Of special note is the inclusion of many of the rare experimental and pattern pieces produced.  Every effort has been made to supply the numismatist with the maximum information relating to each issue. All main design types are illustrated with photographs taken from specimens in the Format reference collection. Individual details are given of edge style, weight, size, and where known, the quantity struck.
Realistic valuations of the coins in four grades of preservation are quoted.
David Vice has been a collector and student of the coinage of the former West African colonies for nearly twenty years. This book has been born out of his frustration as acollector, caused by the lack of information on the series.

Format specialised in British colonial coins for many years, and handled most of the major rarities of the West African series.

David has a rare gift for a numismatist, that of patience, and this book has been in preparation for many years. The patient way in which he has approached the subject has added to the quality of the finished work. Most of David's previous published work has appeared in Spink's Numismatic Circular, and he was co-author with the late Major Pridmore on several important articles.