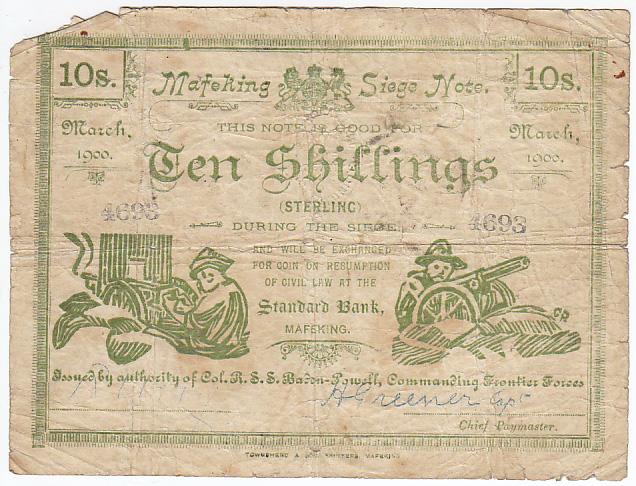 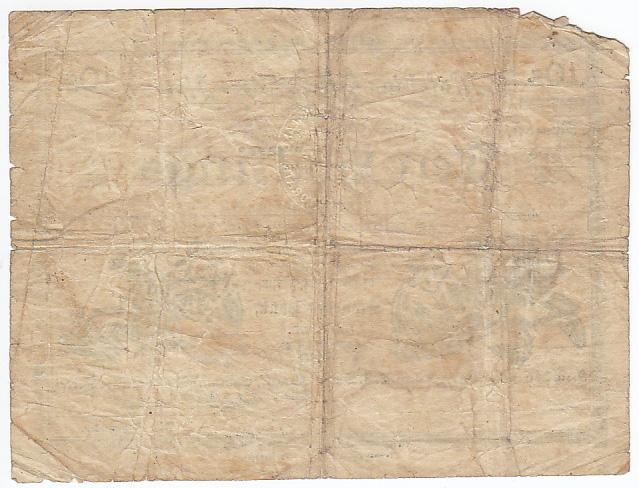 Banknote, 10 shillings, March 1900, serial number 4693.  Printed green on white paper, 158 x 120mm.  Mafeking siege note, March 1900. Arms of the Bechuanaland Protectorate top centre, THIS NOTE IS GOOD FOR TEN SHILLINGS (STERLING) DURING THE SIEGE, AND WILL BE EXCHANGED FOR COIN ON RESUMPTION OF CIVIL LAW AT THE STANDARD BANK, MAFEKING. [To the left and right a soldier with a Maxim gun and a soldier with a Nordenfelt field gun.]  Issued by authority of Col. R. S. S. Baden-Powell, Commanding Frontier Forces. [Signed with facsimile signatures in blue of] R. Urry [the Manager of the local branch of the Standard Bank and] H Greener Capt, chief paymaster. [Printed by] Townshend & Son, Printers, Mafeking.

Four folds, top left corner missing, several pinholes and has been ironed flat.
The Mafeking siege notes were printed in denominations of 1, 2, 3 and 10 Shillings and £1.
The 10 Shillings and 1 Pound notes were designed by Colonel Baden-Powell himself who later noted “The design for the one-pound note I drew on a boxwood block, made from a croquet mallet cut in half, and this I handed to a Mr. Riesle, who had done wood engraving. But the result was not satisfactory from the artistic point of view, so we used that as a ten-shilling note and I drew another design which was used for the pound note.  These could all be exchanged for cash if presented within six months of the end of the siege. But few of them were presented, since people kept them or sold them as interesting mementos.
Thus the Government scored at least six thousand pounds and for two years afterwards were calling on me for explanation of what they supposed was faulty bookkeeping which showed us so much to the credit. Sentiment didn't enter into their calculations.”