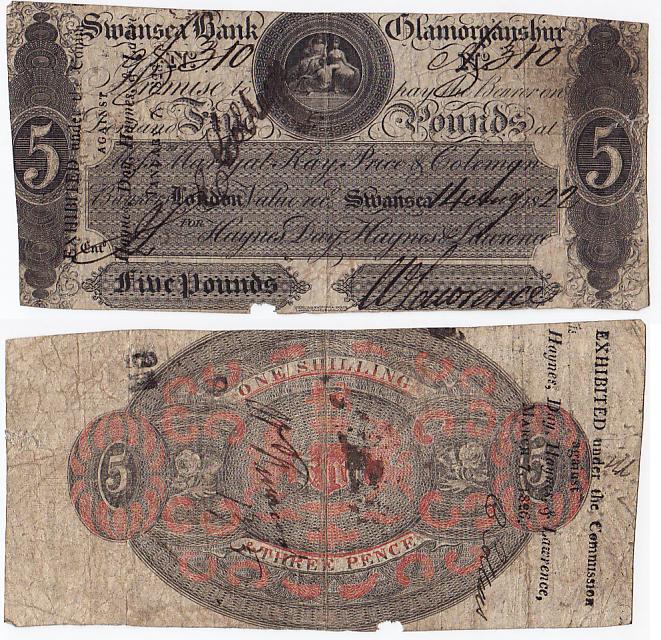 George Haynes was born in 1745 to a Warwickshire Quaker family. As a young man, he migrated to Philadelphia in the Quaker colony of Pennsylvania where he established himself as a merchant. He was a subscriber to the Bank of Pennsylvania in 1780 and held two shares in the Bank of North America, of which he was briefly a director from 1782 until his return to Britain in 1783.

On his return, he settled in Swansea. Around 1786 he became a partner in the Swansea Pottery. In 1790 he became managing partner and set about modernising the works along the lines adopted by Josiah Wedgwood at his Etruria works and changed the name of the works to the Cambrian Pottery. Under his management it flourished, producing high quality porcelain. Following the death of John Coles, the son of the founder of the Pottery, Haynes became its sole proprietor and traded as Haynes & Co.

Around 1800 Haynes became associated with Henry Pocklington in a banking house in Swansea. Following the death of Pocklington in 1816 Haynes became the senior partner and took his son, George Haynes junior, into the business. George Day and William Lawrence were subsequently admitted as partners and the bank traded as Haynes, Day, Haynes & Lawrence. The partnership subsequently extended its activities to Llanelli where it traded as the Llanelly Bank.
In 1820 Haynes and his two sons opened a further bank in Neath. The Swansea bank acted as Treasurer to the Swansea Tontine which was formed in 1805 to build the Theatre Royal and the Assembly Rooms, with Haynes as one of its promoters and its Secretary. The following year he became Treasurer of the Swansea Society for the Education of Children and by 1816 was also Treasurer of the Swansea Savings Bank, and of the Royal Swansea Lancasterian Free School.
An influential man, Haynes was appointed one of the trustees of Swansea Harbour. In 1794 he was elected to the committee of the Swansea Canal on its formation and continued as a member until 1822. He was himself a trader on the canal at one time as a partner in the Brynmorgan colliery in the Swansea Valley. He also took an active part in municipal affairs and was concerned with improvements to paving and lighting the town and to its postal services. Between 1803 and 1808 he was a captain in the Western Glamorgan Infantry Volunteers.
In 1803 the publication of a weekly newspaper in Swansea was proposed. Haynes formed a company to raise the necessary capital and in 1804 publication of the weekly newspaper, The Cambrian, commenced, the first newspaper to be published in Wales. The paper was controlled by Haynes and his son George until they sold their interest in it in 1822.
Haynes was a founder member of the Glamorgan Library (1804) and proprietor of the Cambrian Brewery (1805), where he had various partners from time to time including Henry Pocklington, his colleague in the bank.
Haynes's closing years were affected by the banking crisis of 1825. Following a run on the bank in December 1825 Haynes, Day, Haynes & Lawrence were forced into bankruptcy in January 1826 followed by the bank in Neath controlled by Haynes and his son, William Woodward Haynes. He died at his home in Clydach on 2 January 1830.